There are a few significant items being discussed at the next council meeting:
If you have any thoughts or questions regarding these items please let me know.

Last night there were a few significant items that were discussed:

Upon showing of good cause therefore, the Planning Commission may extend the period of a permit in which it is to be exercised, used or established, for a maximum of twelve (12) months at a time or as otherwise specified on the permit.

It was made clear that the term "good cause" is not defined, and therefore the Council had discretion on what criteria is uses to determine if there was good cause, and whether the criteria was met.  The second clause of the sentence above states that even if "good cause" is shown, the extension "may" be granted.  In statutory construction, the word "may" indicates a discretionary action.  When legislators wish to require an action, the word "must" or "shall" is typically used, with the latter falling out of favor in recent times.

I made it clear that while previously some folks may have felt compelled to take actions at a project approval stage because of various legal requirements or potential penalties, none of that existed at the project extension stage and that any action take is based on each individual's choice.  I made a motion to grant the appeal and reject the 1 year extension.  Myself and Councilmember Diaz voted to reject the extension, however ultimately it was granted on a vote of 3-2.   The builder now has until March of 2023 to pull building permits.

There are a couple significant items on the agenda for the next meeting:
If you have any thoughts of questions on these items, please let me know.
at July 16, 2021

While we were able to balance the Fiscal Year ending June 2022 (FY22) budget with a slight surplus, we are projecting growing deficits for each year projected thereafter. The latest estimated deficit for FY23 is approximately $200K, growing slightly more than $100K each year thereafter. This is an unsustainable situation and we need to address it if we as a city wish to remain solvent. 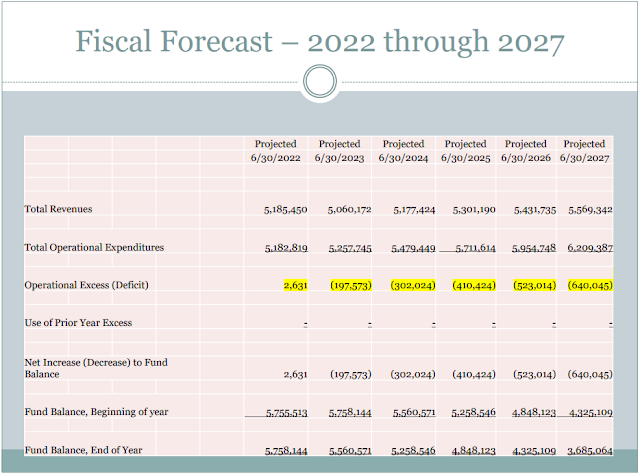 The causes of the projected deficits are not complicated – our spending is growing faster than our income. Most of that spending is in the form of wages and in order to be competitive with the market we have had modest increases to wages over time. Wages are the largest component, but the cost of everything has risen as well. Our income as a city however, is primarily a function of property taxes and our property tax base is not elastic. Our revenues will not keep up with our spending. As a result, city staff are paid well below market and even then it is projected our costs will exceed our revenues starting with FY23.

In addition to our general fund, three of our Special Revenue Funds (Stormwater, Lighting, and Oakhurst Geological Hazard Abatement District [GHAD]) are projected to be insolvent in the coming year as well. These special revenue funds were established to cover certain costs like the streetlights and have their own dedicated revenue sources, however the amounts levied have not kept up with inflation and therefore if we do nothing, the services they provide will have to be curtailed or they will need to draw from the general fund exacerbating our budget challenges.

It is true that we have significant reserves, however using reserves to cover ongoing operational expenses would be like using a credit card to pay for groceries and not paying off the balance. That would be unsustainable and fiscally irresponsible without a long term plan that doesn’t rely on reserve spending. That’s where we are today.  And while I am typically fiscally conservative, part of good governance and stewardship is to ensure our overall finances are sustainable and we are able to continue operations as a city.

There are 26 employees in the City of Clayton, of which 12 are in our Police Department. Of the 7 Department heads, all are compensated less than the median wage across comparable cities, by an average of 23%. In the past 3 years, we’ve had four different Community Development Directors, four different Finance Directors, five different City Managers, and turned over 50% of the police force. There are a number of reasons for this, not all of which are connected to compensation, but it cannot help that as a city we are significantly under market in what we pay our employees. Our total compensation for city staff, including PERS, benefits, and other required employee related costs is approximately $4M/year. If we are 23% below median, that would represent an annual shortfall of approximately $920K.

High staff turnover is detrimental to the city in many ways. When we are short staffed, the level of service we are able to provide is reduced. Open positions puts a burden on existing staff and required work essentially gets triaged into what is most important. The impact on employee morale is also a factor, and hurts our ability to attract and retain employees. It’s difficult to have an engaged workforce when it’s a regular occurrence that a co-worker can leave to a similar job in a nearby city and get a 30-40% pay raise.

The consequences of being unable to staff our open positions are substantial. Some consequences may be more indirect - if we are unable to provide the services that our residents expect Clayton can become a less desirable place to live and we may lose our tax base as property tax revenues may decline. Other consequences may be more direct - If we are unable to remain in compliance with state mandates, we could lose funding for certain activities like road maintenance - exacerbating the deficit between what the city is able to accomplish and our residents’ expectations.  If we are unable to attract talented individuals to fill our roles, the city is more at risk to making erroneous decisions that could incur liability as a result.
Actions:

It is clear to me that we need to take action. So here is the question – In order to address the structural deficits we are facing, should we increase taxes, reduce services, or both? We often want a high level of service at a low cost – an unrealistic desire. If we want a high level of service, we have to be willing to pay for it. As an elected representative, my top priorities are public safety, fiscal sustainability, and preserving home values – all things that contribute to quality of life. To deliver on these things, it requires adequate staffing and resources. Continuing with the status quo is not sustainable, therefore we need to take steps to shore up our financial position. Those steps could be increasing revenue (taxes), reducing services, or both.

To ensure fiscal sustainability, the city could increase its revenue by approximately $1M/year. This amount represents the approximate difference in what we pay vs. the current market rate.  We could also target a lower rate, but for the sake of discussion I'll use this amount as a placeholder.

The two main tools we have to increase revenue (taxes) are via sales taxes and parcel taxes. Sales tax increases have the benefit of deriving a portion of revenue from non-Clayton residents who shop within the city. The largest sales tax providers in Clayton are Safeway, Walgreens, and CVS. Sales tax however, is only approximately 11% of our general fund revenue. Our current projection for sales tax revenue is approximately $585K. To achieve a net increase of $1M in sales taxes, it would require a significant increase in sales tax rate. 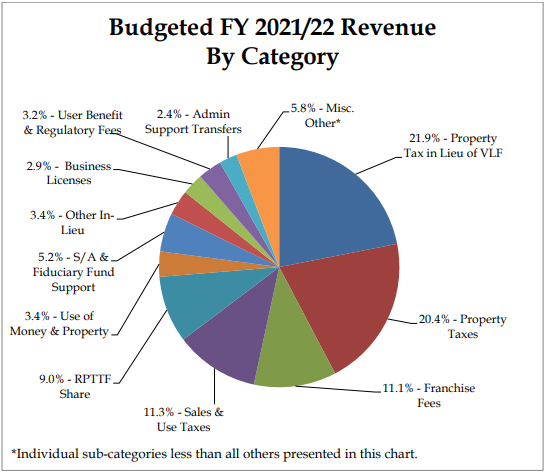 Property taxes represent approximately 42% of our general fund revenue and are our largest source of funding. With approximately 4,400 residential units in the city, this is a wider and more stable base of revenue that the city may draw from. To achieve a net increase of $1M in parcel taxes, it would require approximately $220/household per year. We could also put a CPI riser on this as we do with other sources of revenue to ensure long term stability. 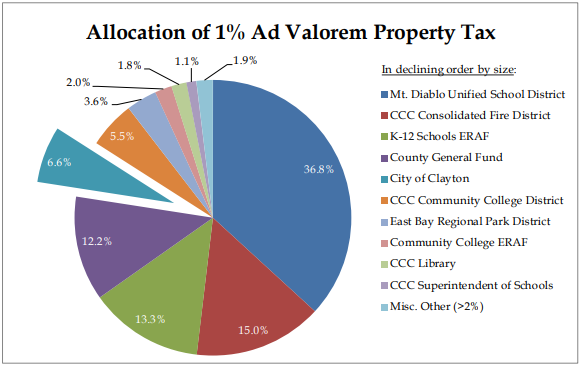 It’s important to note that Clayton’s share of the 1% ad valorem (based on assessed value) property tax is actually quite small. Of the total amount paid in ad valorem property taxes in Clayton, the City only receives 6.6% of that. For a house assessed at $500,000, they will pay $5,000 in ad valorem property taxes, but of that amount, only $330 will be received by the City. The remainder goes to other destinations like schools, libraries, and Contra Costa County. A parcel tax however is different. If voters approve a parcel tax, 100% of that would go to the city. If a levy of $220/household per year is approved, then all of that would go to the City of Clayton.

For any general taxes (taxes without a restricted purpose), either sales or parcel, they are required to be placed on a ballot during a regular election (not special election, like a recall), and receive > 50% vote.  Special taxes with restricted purpose require > 2/3 vote.

Another way to address our projected deficits would be to spend less. For example, we could eliminate the stipend for Councilmembers which would save approximately $28K. On a General Fund budget of $5.2M however, that is not enough to make any significant difference. 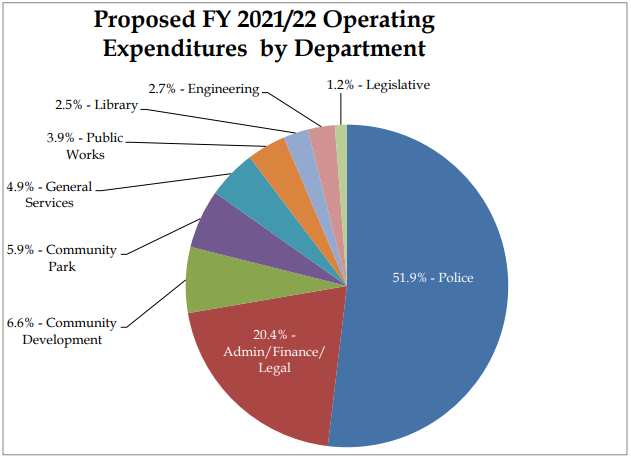 Our two largest components of the General Fund spending are Administrative Services (department heads) and our Police. Together, these two components make up over 72% of our general fund. For a reduction to be meaningful it will necessarily need to impact those areas. That could mean deprioritizing non-emergency police services, less maintenance of the parks, or other steps to reduce costs.  As a city we operate very lean already.  At any given time, there are only two police officers on duty.  We staff as light as possible to meet our requirements.  Any reduction will be felt in the specific area impacted as well as other tangential areas. The added risk of reducing services is we make the city a less desirable place to work and live, which could have a detrimental impact on home values and quality of life.

Conclusion and request:
No matter what combination of actions we choose, it will take time and resources to execute. That’s why I want to start this conversation now. I think our goal should not necessarily to be competitive with other cities on compensation – we don’t have the population base or size to do that. What I think we should do is not be so far away that it is difficult to attract and retain employees in a way that is detrimental to the operations of our city. A modest parcel tax could ensure fiscal sustainability and the services we’ve come to enjoy as part of the quality of life of living in Clayton.

Soon the Council will be discussing if and how our reserves should be spent down and utilized.  To me, I think we need to focus on how to sustain our ongoing operations before we decide to spend down our savings.
I’m interested to hear your thoughts.
eta:  I realized I made an error on my initial post above.  I transposed the vote requirement for a general vs. special tax.  General taxes require > 50%, where Special taxes require 2/3 approval.  In my head I must have switched those around.  Apologies and I've corrected this in the body of this post.
at July 13, 2021