There are two significant items on the agenda next meeting:
In addition to these agenda items, as I mentioned previously for each meeting from now till the election in November, each candidate will have an opportunity to speak for up to 3 minutes so that the community may better get to know them.  This will be towards the beginning of the meeting.
If you have any questions or comments about the above, please let me know.  Also, if you'd like to receive updates by email, you can sign up here.
at August 27, 2020

I sent the following letter to Assembly Member Grayson today:

Sacramento, lead by folks like State Senator Scott Wiener, continue to try and dismantle local control in an effort to upzone everywhere, without regard to local communities.
at August 24, 2020

Last night there were a few significant items discussed:

We heard from each of the six candidates that are running for the three city council positions this November.  The four new candidates had a chance to introduce themselves, and the two incumbents had a chance to go over why they should be re-elected.

We discussed the latest Traffic Survey over the collector and arterial roads in Clayton.  As required by law, a traffic survey is needed every 5 years, though there is allowable one 5 year extension.  Our last was conducted just over 10 years ago so we are overdue.  Without a valid traffic survey, our police would be unable to utilize radar to measure and enforce speed limits on the collector and arterial roads in the city.

Based on the results of the traffic survey, the law will dictate the minimum speeds that are allowed to be set.  I found it quite incongruous the circumstances that result in increasing speeds.  Courts tend to dismiss speeding tickets for small amounts over. This results in people driving faster, which results in the average speed increasing, which results in a traffic survey that shows faster speeds, which then means the speed limits need to be raised.  It's like the worst game of 'if you give a mouse a cookie' and the result is we are less safe.

Overall there were three roads in Clayton that were slated for increased speed limits: 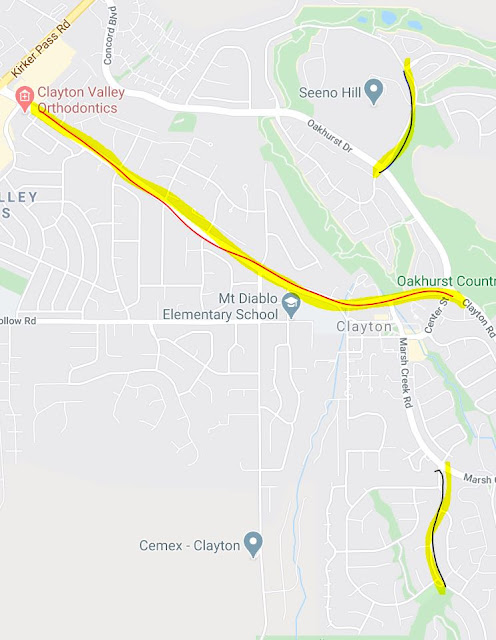 There were questions about the validity of the traffic survey as conducted.  A few that raised questions were the time window over which it was conducted - some were shorter than expected, and some the data was incomplete.  Also the collection method was via video - in previous scenarios radar was used which may have lead to more accurate measures.  The measurement period in some cases was after shelter in place orders were in effect, reducing the number of cars on the road and potentially increasing rates of speed.
We also looked at a proposal to reduce the number of lanes on Mountaire Parkway from 2 lanes in each direction to 1 lane.  Before we do this, we would want to reach out to the Dana Hills HOA and ask them to inform/inquire with their residents on the viability of that plan.
We also learned a few interesting facts:
Overall the Council voted to not adopt the new traffic survey in the areas above that would have been impacted by increased speed limits.  Once speeds are increased, they are rarely lowered and we felt that it was worth taking the time to see if various modifications could result in a more favorable outcome on the traffic survey.  We asked staff to come back at the next meeting if possible, to discuss a 4 prong plan to do the following:
We also discussed a position letter to be sent to ABAG.  There are currently two general schools of thought when it comes to allocation of housing units in the upcoming RHNA cycle.  RHNA is the process by which the state forces localities to zone for additional housing units.  One method bases the housing unit allocation on where the houses currently are.  This is the 2019 baseline method.  The other method bases the housing unit allocation on where jobs and transit are and are expected to be in the future in an effort to align jobs and housing, and reduce overall greenhouse emissions due to commutes.  This is the Plan Bay Area 2050 method.
The Plan Bay Area 2050 method would result in a significantly lower allocation to cities like Clayton.  This is the method that the city asked ABAG to implement with the letter that was sent last night.
Mayor Pierce mentioned that there are those in Sacramento who wish to punish cities like Clayton, those with higher incomes and good schools, to force our city to zone for more and more units, including affordable units.  Folks in Sacramento have been trying to do this for years.  The language they use is "high opportunity areas"  For example, legislation like SB50 introduced by State Senator Scott Wiener which failed earlier this year contained provisions that would severely impact our city with the so called "high opportunity areas", essentially stripping local control and forcing us to allow things like duplexes, fourplexes, and eight plexes in previously single family zoned areas.  Senator Wiener is still at it with more current legislation and folks like him are part of the reason Sacramento has continually tried to assault small cities like ours.
I am hopeful that the Plan Bay Area 2050 methodology is selected, and folks like Senator Wiener get the message and are defeated at the ballot box.
I also requested two items for future agendas:
at August 19, 2020

This November there will be six candidates vying for 3 spots on the City Council. They are as follows (ballot order):
Here is a link to each of their candidate statements.
While state and national news get a lot of coverage on the news, elections at a local matter often can have a greater impact on our everyday lives. I encourage everyone to find out as much as possible about who they may vote for – remember you can vote for three.  To assist with getting to know the candidates, each candidate will have time to introduce themselves and speak at every Council meeting from now until the election.

I've spoken to each of the four new candidates and am still developing my thoughts which I'll share at a later time.
I wish each candidate the best of luck.

There are a few significant items on the agenda for the upcoming Council meeting 8.18.20:

Countenancing faster driving through town should be taken with caution as faster speeds impact the safety of our residents.

If you have any questions or comments about these items please let me know and I'll get back to you.
at August 15, 2020

There was only one significant item on the agenda tonight, and that was conforming our fire codes with updates from the County.  We keep aligned as the County is the one that provides fire protection services.
There were a few public comments that were made that were consistent in theme - those were regarding some signage at Canesa's.  The sign on the masthead has the words "Ammo is expensive, do not expect a warning shot" with an image of a handgun.  A few people found this offensive, or threatening.  Some felt that the city should do something, that this type of speech shouldn't be allowed.
We don't typically address public comment during the meetings, but as free speech is critically important and should be judiciously guarded, I wanted to address some of the comments made tonight.  There is absolutely nothing the city could or should do with regard to this type of business signage. City action interceding would almost certainly run afoul of the first amendment. People have the right to say what they want, even if the content may be distasteful or offensive to some.  It is important to remember that the protections over speech are not necessary when expressing views that are popular.  Free speech protections are needed for expressing views that are unpopular.  It is in protecting unpopular speech that we demonstrate our principles.  Any time speech is being restricted I would challenge the basis on which such restrictions rest upon.
at August 04, 2020

There are a few significant items on the agenda for the next meeting:
One item not on the agenda that is important: This November, there are three Council seats up for election.  For any interested candidates, the deadline to file is Friday, August 7, 2020.  Candidates interested in running need to schedule appointments with the City Clerk so that perspective candidates may be provided with the requirements and documents for filing for elective office. Appointments are available through August 7, 2020.
If you have thoughts or questions about the above, please let me know.
at August 01, 2020