Last night there were a few significant items discussed.

In my public comments, I also commented about the state of our schools and distance learning.  Statement is below:

I’ve looked through the last couple school board meetings and I have to say, if anything is on that agenda that isn’t related to opening schools as fast as possible, then you are doing it wrong

This has been a failure from top to bottom and those in leadership positions have forgotten their primary duty – to educate kids.  From the state level where teachers have just recently been able to get vaccinated – why they weren’t on the list from the first place is mind boggling, to the school district who is unable to do the right thing and stand up for our students, to the union who is capitalizing on a national travesty to further their own ends.

Recently there was a survey asking MDUSD families what their preference was to return.  The District is trying to take the results of this survey, about 50/50 between returning hybrid and full distance learning, to mean something.  But this survey was a sham.  Sure it asked a question, but the choices were abysmal.  The only options offered were either full distance learning, or two days per week, two hours per day, in the afternoons only for “support” rather than actual instruction.  That was an insult to working parents and to tout those results as somehow indicative of parents desire to maintain fulltime distance learning is disingenuous.  The District should be ashamed.

I’ve looked at the demands put out by MDEA, the local teacher’s union and I find it strange that they are more restrictive than anywhere else.  They demand that the case rate be measured not by county, but by city.  And that to have kids back in the classroom, that rate be no greater than 7 per 100,000, rather than the 25 per 100,000 put out by state health officials.  Clayton has about 11K people, which means to meet that requirement our case rate would need to be ZERO. Not sure which medical school the teacher’s unions went to, but presume that they are in a better position to determine medical safety than the CDC or state and local health officials is absurd.

The more things open up, it is a given that the chance of people getting sick increases.  No risk can be mitigated to zero though.  And while that potential risk increases, we know that the actual negative impact distance learning is having on our students’ education, socialization, and mental health is real and is happening right now.

If this is your school board, send a message loud and often that their actions are unacceptable.  They work for us.  Fire them.  Recall them.  Don’t ever vote for them again.

If this is your union, send a message loud and often that their actions are unacceptable.  Remember you don’t have to pay the dues and you don’t have to be a member of an organization engaging in activities you do not support.  In 2018, the United States Supreme Court held in Janus that compelling public sector employees like teachers to be a member of a union they do not wish to belong to, or to pay dues or agency fees against your will, is unconstitutional.   The district has raised the alarm that 1,000 out of 29,000 students have left the district.  If this is the course of action being pursued by MDEA, I would hope to see an even greater exodus from MDEA’s ranks as well.

There have been a number of communications regarding the Clayton Community Church proposal near the elementary school.  I requested that staff assemble a few bullet points to clarify the process and what the public should expect to see as the project moves through the pipeline, as well as where they can get involved.

There are a few significant items on the agenda for the next meeting:

If you have any thoughts or questions, please let me know.

There were two significant items on on the agenda last night.

There are two significant items on the agenda for the upcoming meeting:

If you have any questions or thoughts on these items, please let me know. 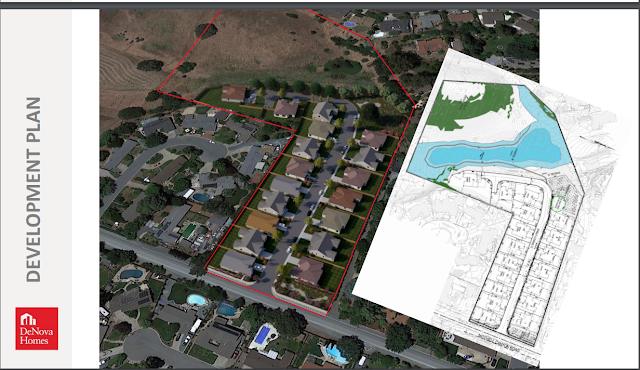 There are a few significant items for the next upcoming meeting.

If you have any questions or thoughts on these items, please let me know.
at January 29, 2021

At tonight's meeting there was one significant item on the agenda and that was what actions to take regarding pedestrian and traffic safety at Kelok Way.  There were a number of items discussed as I wrote about last week.  In addition, Police Chief Warren also mentioned two additional suggestions to consider including a Mosquito unit which acts a sonic repellant broadcasting a high pitched noise at a frequency only younger folks could hear.  The other item was a motion activated light that would illuminate the area if movement was detected.

One thing that did appear to be having an impact is making the entire area red zone no parking.  As a result of this, police have been able to issue 40+ citations the month or so since the curb was painted.  Police have to prioritize their activity so they aren't able to respond to calls right away all the time.  Hopefully over time making the area no parking will have the effect of reducing traffic to the end of Kelok Way.

There was an ad hoc Public Safety Subcommittee meeting held to discuss this matter as well, but that was a few months ago and it appeared that not all interested parties were able to participate.  As such, the Council sent the matter back to the Public Safety Subcommittee to discuss with residents further and report back on recommendations.  When that is scheduled it will be communicated out so that all who are interested in participating will be able to do so.

There is one significant item on the agenda the next meeting and that is to discuss traffic and pedestrian safety around Kelok Way.  Recently there was a vehicle vs. pedestrian accident and there have long been concerns from residents in the area regarding vehicle speeds and inappropriate conduct at the top of Kelok Way that impact quality of life and overall safety.

The staff report discusses 11potential items for discussion:
Staff was neutral on items 1-6, and would not recommend options 7-11.  Each may be discussed at the next council meeting.
If you have questions or thoughts on any of the above, please let me know.
at January 15, 2021

Last night there were two significant actions taken.  The first was whether to send a letter I had drafted regarding RHNA overestimation.  Based on evidence documented by the Embarcadero Group and Freddie Mac, it appears that there were significant deficiencies in the methodology used to determine the housing allocation figures across the state.  The result is that the allocation to the Bay Area is likely significantly greater than is supportable.  This letter is to express concern regarding the housing figure, and to ask that HCD reconsider the number of housing units allocated in light of the new evidence.

This is part of a larger effort by many local cities and regional bodies who are taking similar action.  The hope is to contribute to that effort and lend our support as a city.

After discussion, there were some minor wordsmithing updates made and a change to specifically direct the letter to HCD, while copying other agencies including ABAG and the Contra Costa County Mayors' Conference.  We unanimously agreed to send this letter.

The second item we took action on what Councilmember Cloven's request to get more information on new housing legislation.  Staff offered two possible courses of action - Either staff could spend time assembling information, or we could engage an outside consultant to provide such services.  Councilmember Cloven clarified his request with more specificity and asked to table the matter based on the refined request.