Results Not Yet Final

So, a bit of an update - interesting day today. There are likely a significant number of ballots still uncounted. Some of this is factual, and some of this is supposition so I will try to separate those out.

What we know - There are uncounted ballots of the following flavors: Ballots turned in outside of Clayton. People could drop their ballots at any collection box in the County. Those are not yet included. Ballots that are designated "late-early" - those absentee ballots that were submitted to the polling place. Those are not yet included. Any ballot postmarked on Tuesday - those have until Friday to arrive to be counted.

Supposition - Mail in ballots that were received Monday or later are likely not included as well. Candidates received a message from the county election office talking about what was and what wasn't included. It wasn't super clear, but my interpretation of the message was that those ballots received after Saturday were not included. More supposition - Average turnout for mid term elections, excluding 2018, and going back to 1998, is approximately 68%. The results as of last night show turnout around 45%. My expectation would be that turnout would be more consistent with the historical run rates.

I've also been in contact with Staff at the city who have confirmed the factual information above and that the results are not yet final.

Given all that, currently 3597 ballots have been counted, with 8017 registered voters. If the turnout % is consistent with prior years, then there may be over 1,000 ballots not yet counted (this is heavy supposition). The secretary of state has 30 days to certify the results and make them final. We'll see how it goes. Here is a summary of the Clayton historical data. All have been pulled from here:  https://www.cocovote.us/current-and-past-elections/past-election-results/ 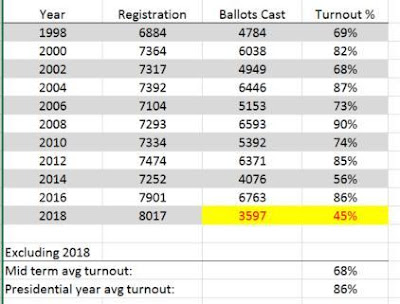