There were a few significant items that were discussed at last night's meeting.  Three items on the agenda, and one on consent calendar.
The consent calendar item had to do with the cost overruns of the curb ramp replacement project that is in progress right now.  Apparently when the city and our engineer originally scoped the work there were several items not included that should have been.  As a result, there was additional work needed to comply with various requirements, including ADA requirements, which necessitated an increase in the total project cost.
We discussed and established Council assignments on various committees.  There were a couple questions about the nature of those committees and if that information was available on the city website.  I had happened to have an older draft from when I came on the Council so I forwarded that to the City Manager to update and post if possible.
We discussed "hero pay" for essential workers that work for the city.  This included police and our city staff.  While I reiterated my top priority was to assist the local businesses and households in Clayton that were impacted by the pandemic, the low take rate on our initial program meant that we would have some funds available to also recognize the work that our own employees have been doing.
I suggested that we create various buckets of funds.  Doing this would allow us to get a bit more granular on any program we implement or modify.   Originally when the Police Officers Association suggested this action, they keyed their request in line with other nearby cities.  But given our size, we have a bit more flexibility in administering a program because the recipient pool is much smaller than in other nearby cities.  I suggested that of our total net allotment of funds (approximately $2.7M after administrative overhead), we designate 10% towards essential worker pay.  And while the broader topic of the other potential categories was not on the agenda so we couldn't take action on it, we did commit to bringing back this topic to further refine the program.  We agreed that a 10% target to go towards our essential workers was prudent and directed staff to work towards bringing back a program that met those guidelines.
We received one public comment about the apparent disparity in compensating our own employees while many in town were not eligible for the first round of the Clayton Cares program due to various circumstances.  In fact, less than 10% of the first tranche of funds was even claimed by local businesses and households.  It is clear we need to do two things - expand the Clayton Cares program to include more eligible recipients, and we need to more aggressively communicate the availability of this program to ensure those eligible can receive the funding that has been provided.
The work here is definitely not done, but we can make incremental steps and implementing a program that recognizes our essential workers is a key component of that work.
We then discussed a progress report on the 6th Cycle Housing Element update.  The focus of this discussion were the draft goals, however there was a lot of information in the update which expanded the discussion quite a bit.  The draft goals were fairly high level, and the process would entail the Council making comments on the goals, then turning them over to the Planning Commission for them to get more into the details and ultimately make a recommendation on adoption.  The goals were drafted as follows:
I took issue with the first goal as "accommodating moderate growth" was nebulous in its meaning and it didn't appear to be a requirement to have.  I suggested that we instead modify the language to reflect the goal that we meet the various criteria as required by law.  Other than that, the rest of the goals appeared okay as many of them are required to be included.
There was also significant discussion around the 3rd attachment (page 142 of 172 of the agenda packet): 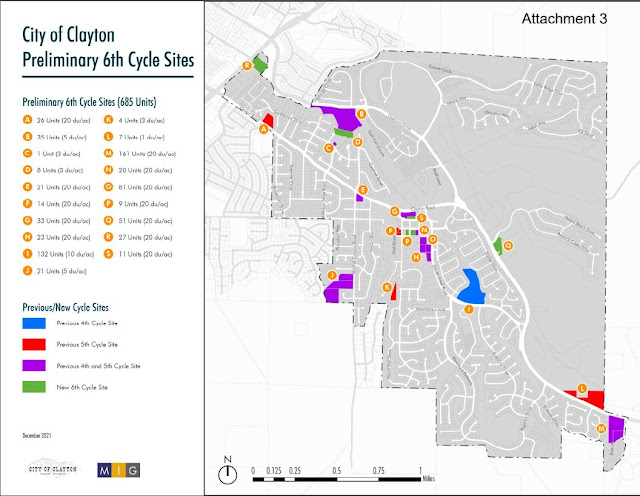 It was emphasized that this was merely a first draft of a proposal.  You may recall that we are required to provide for 570 units at varying income levels:

There are some requirements that if an opportunity site was included in the last two housing element cycles then it will be required to provide at least 20% of the units at that site as very low income.  One way to satisfy this is to change the zoning to be 20 units/acre.  I inquired if there were other ways to satisfy this requirement because if we move forward with the draft as presented, it would mean increasing density all over the city.
I did mention that we have some latitude because the city actually owns some of the opportunity sites that have been identified.  So while in other instances if a zoning density increase occurs, the property owner then has a by-right ability to build at that density, in the instance where the city itself owns the property, it will have ultimate decision making authority whether anything gets built on those sites at all.  The law requires that we zone at a certain density, not that any build actually occurs.
There will be more discussion over the course of 2022, however the options available to the city are limited as the state has constrained a great deal of choices that cities have.  We will definitely need to zone for the units, the question is where.
We also had a closed session regarding labor negotiations and there were no reportable actions from that closed session.
at January 05, 2022