Last night the Council denied the appeal of CEQA exemption and determined the Olivia project to be exempt from environmental review by a vote of 3-2.  Myself and Councilmember Diaz voted no. The Council also granted the appeal of the applicant, Bill Jordan, approving the Olivia project by a vote of 3-2.  Again, myself and Councilmember Diaz voted no.

Mayor Pierce spoke at some length again as she has in the past, about her desire to want to make Clayton a place that her kids and grand kids can afford to live in.  This is a laudable goal.  I too would love for my kids to be able to live in the place where they grew up.  Unfortunately, this project is not how that will come to pass.  As Pierce noted, with 74 of the 81 units being market rate, it is unlikely that these will be affordable for any young family.  Pierce herself said she would not likely be able to afford these units.

Realistically the only way that Clayton will be a place that all of our kids will be able to afford to live here, is if the property values of the city, and perhaps the overall housing market in general, were to dramatically decrease.  That's the reality.  If the intent is to make the city and the state more affordable, then we shouldn't be haggling over an 81 unit apartment complex.  Pierce and those who feel similarly should be in favor of a hundred different 81 unit apartment complexes, or a thousand, or ten thousand of them.  They should be pushing draconian rent control, more taxes to fund pet projects, and top down command and control to bend the economy to suit their desired outcomes.  Actually, that is what Pierce is trying to do.  Because that is what it will take to make housing more affordable in one of the most desirable and in demand places to live in the country.  That is not an outcome I would be in favor of but it is what Pierce has been pushing for across the region.

We are elected to represent our constituents in this city.  Not the region, not the state.  The property values of our residents represent some of the biggest investments they have made in their entire lives.  Sacrificing that hard earned savings on the alter of someone's morality is not what we are elected to do.

Pierce went on to say how she works with various regional groups to try to coordinate development efforts in the region because her constituents in Contra Costa County are concerned about housing prices.  That may be true, but I don't represent all the people in Contra Costa County.   And when Mayor Pierce is sitting along side me, she should not be either.  I represent the people of Clayton.

And while it is true that historically there has been some great development in the city, we should not equivocate on what development actually means.  All development is not the same.  Each project should be evaluated on its own merits.  Some will be great, like Oakhurst and Clayton Station where Safeway is.  Others will not be, like the failed gas station, the failed memory care facility in the center of downtown, and this 81 unit rental complex across three separate parcels.

Ultimately there were two decisions last night CEQA and Project Approval/Density Bonus and I'll break up commentary around both.

The project sought CEQA exemption under Class 32 Infill.  This exemption requires 5 criteria to be true:
(a) The project is consistent with the applicable general plan designation and all applicable general plan policies as well as with applicable zoning designation and regulations.
(b) The proposed development occurs within city limits on a project site of no more than five acres substantially surrounded by urban uses.
(c) The project site has no value as habitat for endangered, rare or threatened species.
(d) Approval of the project would not result in any significant effects relating to traffic, noise, air quality, or water quality.
(e) The site can be adequately served by all required utilities and public services.

One item I focused on was item (b).  This requirement states that the project needs to be substantially surrounded by urban uses.  There's no hard and fast rule for what is "urban" vs. what is "rural", but in all analysis in every context this question is examined, something cannot be simultaneously "urban" and "rural".  So let's look at the surrounding parcels in the general plan map: 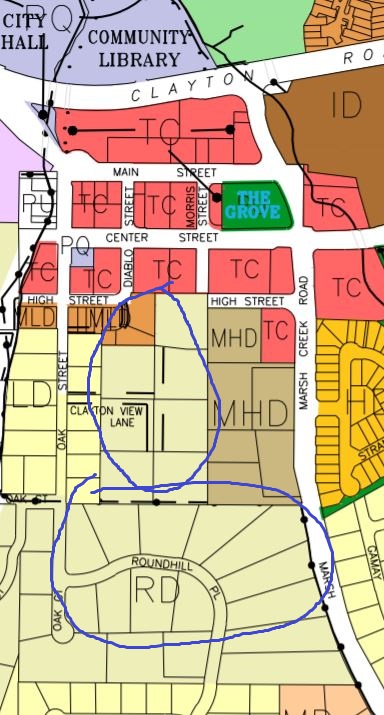 On two sides of the Olivia project parcels, are zoned properties that are literally zoned, "rural estate".  I find it incredulous that those parcels that are "rural estate" are being construed equivalent to "surrounded by urban uses".  If we look at the zoning map, the designation is "R-40-H": 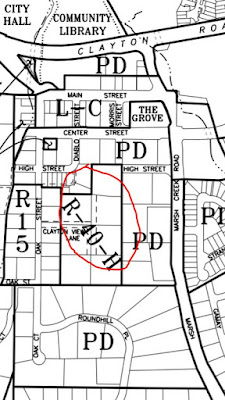 Which means among other things, that each of these parcels may have horses on them. Having horses is incongruous with "urban uses". This alone would be sufficient to deny the CEQA exemption.

But there is more. Required (d) above states that to qualify for the CEQA exemption being sought, the project must not result in any significant effects relating to traffic, noise, air quality, or water quality. To support this assertion for traffic, the applicant and the city, relied on a traffic study that was done 10+ years ago. And that is in addition to the analysis being based upon senior housing, which we know this project is not. So not only is the wrong demographic for calculation being used, it is relying on outdated data.

My fellow councilmembers who voted in favor of this project as well as staff focus on the fact that there hasn't been much building in Clayton over that time period. But this is a myopic view of factors that may impact traffic. Traffic has certainly gotten worse over the past 10 years, as Clayton functions as a pass through from the east in Brentwood, and other places where there has been dramatic growth. It's willful blindness to think that a 10+ year outdated traffic information based on the wrong demographic is sufficient to sustain a CEQA exemption.

At the very least, the combination of these two things should have been persuasive to deny the CEQA exemption. Councilmember Catalano characterized this as merely a "delay tactic". But this is revealing in the overall thought process. To consider performing environmental review as simply a delay tactic means that the outcome is a fait accompli. But this is not so. The purpose of an environmental review is to examine potential environmental impacts, assess those impacts, and then take action based on that new information. Being open to taking action on new information is exercising the appropriate level of diligence. Treating environmental review as merely a delay tactic as something to check off and then proceed as if nothing happened is not the intent of CEQA.

Density Bonus Concessions and Waivers
The law does not allow very much discretion when it comes to the granting of concessions. The Olivia project requested concessions on parking and setbacks. The law grants slightly more discretion in terms of waivers. Waivers can be denied if they would not otherwise preclude the building of the project overall. So let's look at the waivers requested:  Here are a selection of some of the waivers sought and granted:

All of these things were waived by the City and Council who voted in favor of this project, and for no reason other than to accommodate the applicant.

There are a few laws in play here. We have our own inclusionary housing ordinances as part of the CMC. Those ordinances already require 10% inclusionary housing for any development over 10 units. The next is the Density Bonus Law. Because the developer is putting in a single additional affordable housing, this project is seeking to trigger the CA Density Bonus Law. That law allows circumvention of the rules for density, height, parking, setbacks, etc. This law is horrible. When the Council chose to apply this same law to rental properties in early 2019, I was the only one opposed.

A single affordable unit allows a developer to put in 20 more market rate units and construct a project totally out of character of the city. For 1 unit, lawmakers in Sacramento and some of my colleagues here by way of zoning changes have not represented their constituents in this city. Our woke overlords in Sacramento and developers may be pleased, but the people of Clayton are not.

With 81 units, and 117 bedrooms, the developer through their own paid consultants asserted that this project will not generate more than 35 peak AM and PM hour trips to and from the properties. That’s a joke. We know the analysis was based on outdated and inapplicable data. There is clearly the potential for significant impact and based on the law, the appropriate way to resolve these unanswered questions is conduct and EIR.

The city already continually renews onsite parking waivers for downtown recognizing that there isn’t enough parking in our downtown area. Having a giant Emeryville like building in our downtown can only serve to exacerbate the parking shortage, and overflow impact to High Street and Stranahan. The consultant that the city retained indicated that the parking was inadequate, spillover wasn’t addressed, relied on outdated information from a different state, and did not consider the nature of our community in that we have few transit, shopping, and employment options in town and therefore the rate of parking and need for vehicles would be increased.

During the first Planning Commission meeting, the only people that supported this project had a financial interest in it. When Howard Geller spoke, he phrased many of his statements as “we are going to” etc. In other words, he’s speaking as if he is involved in the project itself. Given the history of when the rezoning of these properties occurred, while Mr. Geller was on this Council, the implication that “we” are going to do something seem untoward. Mr. Hoyer also spoke in favor of this project at several of the meetings – Mr. Hoyer sold an adjacent undeveloped parcel about 1 month ago for $1.5M. There will be more development in that same location as a result. And while that is a large sum of money for a parcel of land, the commensurate decrease in home value and quality of life for a great many other Clayton residents should not be overlooked.

Ultimately, I ask myself how this will help Clayton.

Should the Council have examined this proposal with greater professional skepticism? It appears that each step of the way, the Council has accepted the applicant’s assertions at face value. That doesn’t seem like the appropriate level of review both from a process perspective, as well as from the lead agency in determining the necessity of an EIR from a CEQA perspective. When the applicant asserted cost feasibility, the Council accepted the figures without examining them. When our consultants called into question the applicability of the parking and traffic information, the Council didn’t call for competing analysis. When waivers were requested for items outside of what was necessary to make project viable, the Council acquiesced without applying the appropriate level of diligence or standard of review. Not a denial, but to exercise a level of diligence commensurate with the magnitude of the project.

These buildings will serve as a monument to poor planning, poor choices by our elected leaders, and a sacrifice of a part of what makes this city great. I asked my fellow councilmembers, that if they had any doubt over the assumptions or conclusions that were offered, to exercise the courage of their convictions and seek additional review.

I was not able to persuade enough of my colleagues, and the project was approved on a 3-2 vote with myself and Councilmember Diaz voting no. I ask that people remember that come November. Elections matter and who we choose to lead us matters.