Follow up on The Olivia Project - Rationalizations and Handwaiving

When we talk about the Olivia Project that the Council approved earlier this month on a 3-2 vote, I accept that reasonable people can disagree whether some benefits are worth the risks.  And if that's all it was - a disagreement about what direction the city should take - then I would probably write my summary as I do after each meeting and leave it alone.

But that's not what happened.  Shortly after the vote, Councilmember Catalano attempted to distort the record on NextDoor - going beyond a disagreement and actually making a claim that wasn't true.  She repeated these false claims in an Op-Ed in the Pioneer soon to be delivered.

Here is what she said:

The claim that no one raised a basis for denying CEQA exemption is simply not true. I raised the issue of not meeting the burden required for CEQA exemption. I discuss this in detail here.

Catalano revealed her preconceived intention to approve this project when she characterized environmental review as merely a delay tactic.  Pierce called the rural zoning outdated. While simultaneously relying on an outdated traffic study.  The fact is, the criteria for CEQA exemption was not met and Catalano and Pierce handwaived this away. Staff couldn't answer the question, and the applicant's attorney chose not to address the issue.

If the rest of the council who voted in favor of CEQA exemption and this project want to say their appeasement was to mitigate risk, so be it. Reasonable people can disagree.  There is no need to lie or mislead about the facts and make the false claim that no one raised a basis for denial. The rest of the Council could have taken the time to resolve this matter, done additional diligence, and sought environmental review. Unfortunately for Clayton, that didn't happen.

But there's more.  Catalano goes on to demonstrate misunderstanding of the order of analysis: 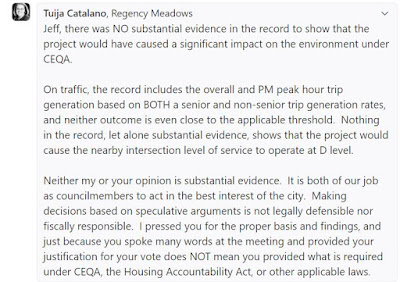 CEQA exemption as used requires 5 specific criteria to be met. Those items are a threshold matter. By skipping to and focusing on the "substantial evidence" standard, Catalano elides over these criteria. Here are the five criteria:

(b) The proposed development occurs within city limits on a project site of no more than five acres substantially surrounded by urban uses.

(c) The project site has no value as habitat for endangered, rare or threatened species.

(d) Approval of the project would not result in any significant effects relating to traffic, noise, air quality, or water quality.

(e) The site can be adequately served by all required utilities and public services.

Only AFTER the infill analysis is complete and a determination is made that infill applies, then to deny the exemption would the "substantial evidence" standard come into play. And even if the Council felt the basis needed to be elevated to this more rigorous standard - that bar was met given the longstanding zoning of rural properties around the project site.

Friends of Mammoth v. Town of Mammoth Lakes Redevelopment Agency makes clear that the exact definition of what is "urban uses" is not defined by law, statute, or caselaw.  From that case (internal citations omitted, my emphasis):


The term "urban" is "not fixed, objective, or easily ascertainable."... At a minimum, however, the mere fact that property is not vacant or is developed in accordance with its zoning does not by itself render the property developed for urban uses.
...
The term "urban" thus refers more to the location and "varying characteristics" of a use than to the type of use. ... For example, a residential dwelling can exist either in an urban area or in a rural area. In either locale, the dwelling can be large or small and, in this era, will likely be served by many public utilities. The fact that it is a developed dwelling does not make the dwelling an urban use. Rather, it is the location and characteristics of the dwelling and its environs that may make the use an urban use. One would more likely conclude a residential dwelling unit located on the 10th floor of a high-rise apartment building in a downtown area served by mass transit is an urban use, while a residential dwelling unit located on a 10-acre parcel in a area devoted to agricultural uses is not an urban use.


As I laid out in my previous post, surrounding properties are zoned "rural estate".  They can all have horses on their property.  This type of use, as well as the literal zoning state the surrounding parcels are not "urban uses".  This clearly demonstrates that requirement (b) from the CEQA analysis above was not met.  Those voting in favor of this project ignored this for some reason.

And the same is true with the outdated and misapplied traffic study.   My position is not that an updated traffic study or using the right demographic would yield any particular result. The point is, we don't know because it wasn't done. My position is that the burden of satisfying the 5 criteria required for infill exemption was not met.

Catalano likes to refer to the maximum possible penalties to heighten the risk.  But these exorbitant amounts are for non-compliance with the Density Bonus aspect, not the CEQA one. If CEQA analysis was required, then the question about the density bonus is is tabled until CEQA is resolved. I am all for following the law. The fact is, there was no requirement to grant the CEQA exemption because the project did not meet the criteria to do so.  Anything else is simply handwaiving and rationalization.

I would have hoped that the Council do the diligence that they were elected to do.  Unfortunately those voting in favor of this project did not.