Neutrality as an Avoidance Tactic


At various times when asked questions, members of the City Council or Planning Commission will often fall back on the excuse that they must remain neutral, or that they cannot comment on issues that they may have to vote on, else they would be forced to recuse themselves.

And while there may be situations of genuine conflicts of interest, like if the Clayton Historical Society is putting a matter before the City Council and Julie Pierce is both a Councilmember and a Board member, then it makes sense to recuse one self. And certainly if a member of the Council is taking money from people that are coming before them, they'd be prohibited from voting. Specifically, if you accept more than $250 from someone putting forth an application within the last 12 months per Gov Code 84308(c):


No officer of an agency shall make, participate in making, or in any way attempt to use his or her official position to influence the decision in a proceeding involving a license, permit, or other entitlement for use pending before the agency if the officer has willfully or knowingly received a contribution in an amount of more than two hundred fifty dollars ($250) within the preceding 12 months from a party or his or her agent, or from any participant, or his or her agent if the officer knows or has reason to know that the participant has a financial interest in the decision, as that term is described with respect to public officials in Article 1 (commencing with Section 87100) of Chapter 7.

Unless the Council is taking money from the groups subject to the decision making process, they are under no obligation whatsoever to recuse themselves.  We know this is true because elected officials state their positions all the time.  If Diane Feinstein believes a certain thing, she's free to state her position, campaign on it, etc.  The same is true for Mitt Romney, Mark Desaulnier, etc.  Office holders can express their support or their objection to virtually any issue if they so choose.  This was from June 7, 2018: 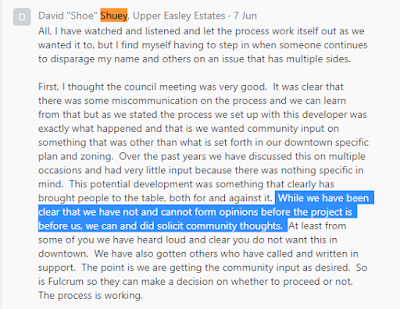 So when Councilmember Shuey says that he can't form an opinion on selling our downtown to Fulcrum to put in a memory care facility, that's not true.  It's a transparent attempt to dodge having to take a position.  There is no prohibition on stating an opinion.  Watch - I'm opposed to any developer that wants to put a memory care facility in our downtown and if elected and the matter comes before me, I will be opposed.  Simple.