Posts and Threads Being Deleted on NextDoor

There are folks in our community who are not interested in open discussion about ideas, but instead would prefer to delete content they disagree with.

I announced the start of my campaign on Nextdoor.  It is there where I learned a great deal of information about what is going on in our city, how people are feeling, and what issues are important to them.  There's one problem though - Nextdoor has deleted the threads I've started, including the one announcing my candidacy.  Here are the Community Guidelines for Nextdoor regarding politics and campaigning: 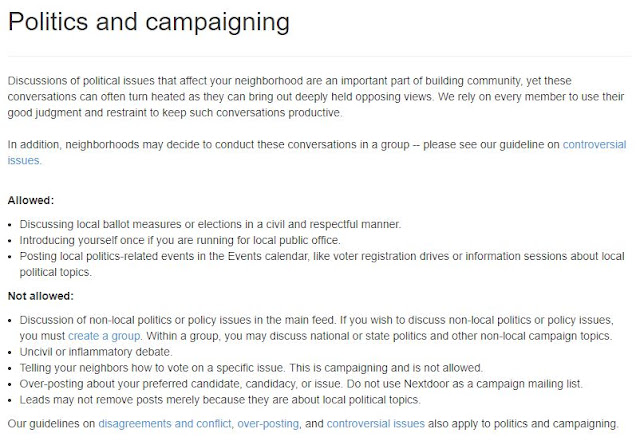 Under the second bullet in the "Allowed" section is introducing yourself.  Except now the thread introducing myself has been removed, along with the many many replies from interested folks around town.  According to their guidelines around removing content, it says this: 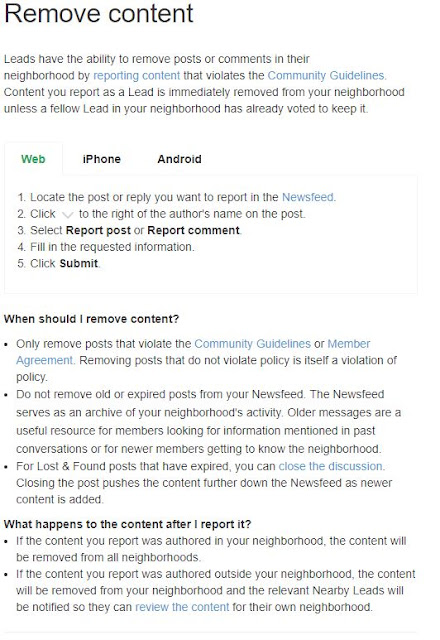 I've reached out to NextDoor directly to inquire as to content in conformity with their guidelines was removed.  Two weeks ago, another person whom I've been in contact with also had several of their posts removed for seemingly little reason.  In this marketplace of ideas, flagging posts for removal, and removing posts that in compliance with site policies, but contain content that one disagrees with is wrong, and counter productive to open debate.

Here is the response I got from NextDoor regarding my thread deletion. I tried to order these by date, but they go back through August 25:

Here Nextdoor changes their mind and decides not to restore the original thread with the previous comments.  They invite me to create a new introductory thread which I have now done.  Apparently I can introduce myself as a candidate, but I am not allowed to ask for people's vote.  Please take a  guess on who I think you should vote for and use your best judgment when voting.

They still neglected to respond to my question about whether I could reply to my own thread, but finally did so after another round of prompting.

Here is the lesson to take from all this.  After having my first introductory thread removed for over 2 weeks, it's clear there are local folks on NextDoor that are reporting content trying to get it removed.  That is within the rules of Nextdoor and their system provides for this.  I also think it's important to understand that this is actually happening, and I wanted to highlight this example of locals within the power structure trying to stifle debate.
at September 10, 2018