At the September 18 City Council meeting last night, there were no action items on the agenda so the crowd was sparse.  There was a great recognition ceremony for one of our volunteer police officers that was retiring, and a presentation by County Animal Control.

As with the previous meetings, all candidates in attendance were invited to speak for three minutes.  As I recently became aware of efforts by City Code Enforcement to restrict the campaign signs that so many supporters have put up, I had to speak out against this clear restriction of political speech.  Here is the transcript of my statement:


I am an active CPA in private industry, the treasurer of my small HOA, and I’ve been a Clayton resident for over 9 years. My family moved to Clayton to raise our kids. We came for the great schools, safe neighborhoods, and small town feel and charm.

You may think, that’s what Clayton already is, so why do you want to change things? That’s the thing, I don’t want to change things. I want to preserve all the wonderful qualities of Clayton that brought me, and so many other families here. But over the last few years, those things have been at risk. When things are going well, I think most people are content to let them continue, as am I. It’s when things aren’t going well that folks like me need to step up and speak out.

When you fail in your duty to protect the safety of all Clayton residents, people like me will speak out. You may hope that because you increased the buffer distance for parolee housing, that people will forget how badly the Council mishandled the issue. But I think you know they won’t.

Maybe that’s why code enforcement is now threatening people who have my yard sign out, who have Brian’s yard sign out. See, in May of last year, you passed a new restriction on yard signs, including political yard signs. By limiting political speech, perhaps you hope that folks will forget, that they won’t know there is an alternative to the establishment candidates. That prohibition on political speech, however, presents an interesting contrast to how you handled parolee housing.

Both scenarios presented some risk of litigation – parolee housing as a matter of first impression with an unknown outcome, and political speech banning based on a long history of jurisprudence where the ordinance you passed likely violates the 1st amendment. But while you demurred to one end of the risk averse spectrum regarding parolee housing, you were more than willing to incur risk to ban political speech.

And when the City Attorney cautioned against increasing buffer zones for parolee housing, you heeded the warning. But when the City Attorney cautioned against banning political speech, you went ahead and did it anyways. So when people like me do step up and speak out, you have more tools at your disposal to quash their efforts. Maybe you’ll be successful, but I’m hoping you won’t be.

That’s why I’m a candidate for City Council.

To expand on the political speech restriction comments above, here is an excerpt from the minutes of the 5/16/17 meeting:

At a follow up meeting on July 18, 2017, the Council made clear that the restrictive ordinance was designed to quash political speech, a core protected right of the 1st amendment:

And that brings us to where we are today. Now, Code Enforcement is trying to use this ordinance to do just what the Council intended - quash political speech which limits opposition.  Here is a copy of a letter received by one of my supporters: 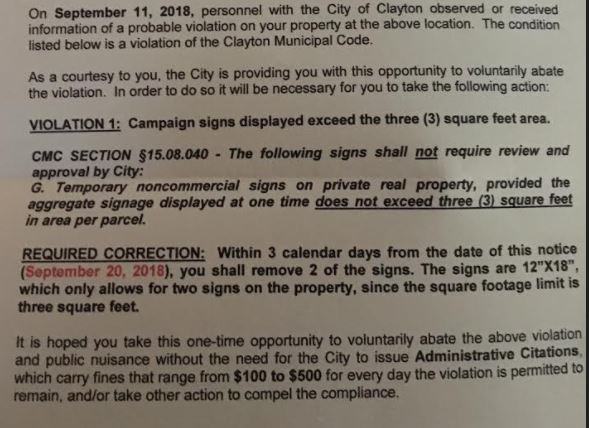 There are several problems here:
All of these restrictions heavily benefit incumbents.  Incumbents and those in the establishment have the bully pulpit to get their message out.  New candidates rely on word of mouth, conversations with neighbors, etc. and limiting political speech in this way can only reduce the chance that any new voices will be heard or get elected.

Separately at the comment period on non-agenda items, I spoke about the numerous efforts of the Council to sell our city.  Here is the transcript of my statement:

A straightforward concept really. Clayton should not be for sale. But if you look around downtown, that's the impression you'd get. The dilapidated buildings on Oak St. have a For Sale sign. The large lot where all of our events and festivals are held have a For Sale sign.

Why is the city so intent on selling its assets? With our current reserve position at approximately $4.5M or 1 year of operating activity, we do not need the one time influx of cash - the city needs to utilize its resources in a responsible way to shape the future of our downtown. Once these properties are sold, the city loses its ability to exercise discretion about how the property is used, and what type of building or structure may go in there. If these properties sell, the city would be constrained to approve many things that residents may not appreciate, but since they'd be consistent with the existing general and town center specific plan, they would be allowed.

This is why the 3 story, three separate building senior rental project right near downtown is on the table. Because of previous actions of the Council to rezone those three parcels from single family residential to high density multi-family, the Council can comfortably say that the proposal for those three buildings is consistent with the general and town specific plan. Well of course it is, because it was rezoned to allow it! And as members of the council have repeatedly told the community, private property owners have a right to develop their property. And because those properties are privately held, and they were rezoned to be high density multifamily, the property owner gets to put giant 3 story buildings in downtown where there are no other 3 story buildings. The property owner gets to take advantage of the CA density law bonus yielding variances for things like height restrictions, setback requirements, parking requirements, etc. All because the Council was complicit in rezoning these properties, and they are privately owned.

If instead the city retains ownership of these properties, the city could take action to ensure the types of business and development that occurs is consistent with the downtown character and charm that attracted so many of us to Clayton. We could offer a variety of creative incentives, like longer term, significantly reduced lease amounts, tax abatements, or other actions that encourage certain businesses to participate, while retaining some measure of control. We could even incentivize the businesses that are already here, assisting them in updating their properties, or doing repairs that may have fallen by the wayside.

Instead, the Council seems intent on installing a senior care facility in the downtown open lot, as you’ve entered into multiple agreements with various developers to do so. That’s wrong for Clayton.

When I look to the future of Clayton, what our downtown could be, I see so much potential. We could have a vibrant downtown full of small retail and locally owned business that benefits all the residents of Clayton. But that future is only possible if the Council shares that vision and doesn't sell our city to outside developers. The 3 story, three separate building senior rental project right near downtown is an example of what happens when the Council doesn’t share that vision. Clayton should not be for sale.

That is why I am a candidate for City Council.

I detailed in a previous post some background on the Council's effort to sell the open downtown lot by entering into multiple exclusive negotiation agreements with outside developers.  But it's not just the one open downtown lot.  The Council has been trying to sell many other parts of downtown.  I wrote about this issue at more length previously.  But it's not just the downtown lots.  The City also wanted to sell the property north of City Hall near Keller Ranch.  For some reason the Council wants to sell our city.  But Clayton should not be for sale and we need a voice on the Council to speak against these actions.