Anyone can say "responsible growth", but what does that mean?  Mr. Wolfe certainly says it quite a bit, but the only thing I can glean from it is that he wants to sell the downtown lot and would like to develop our downtown.

Instead of the empty rhetoric, here is some actual data - this is going to get a little more detailed, but I've tried to stick to the salient points.

The City is required to assemble its Housing Element that is divided into 8 sections.  The current period Housing Element spans 2015 - 2023.  As part of the Housing Element, Clayton is assigned a  Regional Housing Needs Allocation (RHNA), essentially the number of units realistically available for housing over a certain time period.  For the time period 2014-2022, Clayton's share of the RHNA was 141 units at varying levels of income:

Based on the current housing inventory, Clayton actually has a surplus of 137 housing units available:

Given this surplus, why would the Council push to sell off the downtown parcel and continually rezone the three parcels near the post office?

Saying "responsible growth" is easy without specifics.  Without specifics however, it is only platitudes.  Given Clayton is nearly 98% built out, there are few development opportunities left.  Simply saying "responsible growth" is not enough.  For example, there are two parcels on the west side of Mitchell Canyon near the quarry.  There is one parcel on Marsh Creek north of Regency near the Water District Pump Station.  There is a larger open lot near Lydia Lane Park.  Other than those, there are the properties downtown.

There is also interaction with the State's no net loss law which complicates any actual reduction in housing available, but because we have a surplus there are ways to proceed.  For example, what was stated by the Planning Director regarding the Southbrook development: 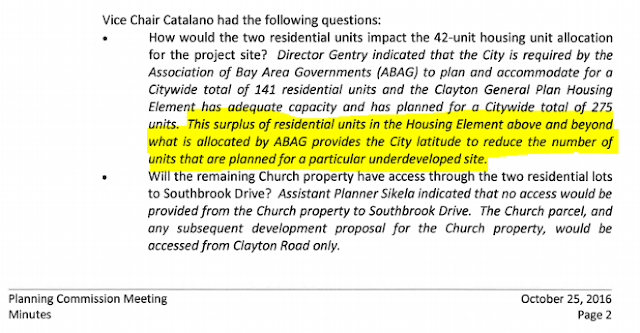 Given the significance of downtown development to the community, I think it's critically important to understand where each candidate stands.  We know Mr. Shuey is in favor of three story high density memory care facilities since he voted to exclusively negotiate with Fulcrum, an outside developer, to put one in the center of downtown.  What we don't know is Mr. Wolfe's idea for that lot other than he wants to sell it and develop downtown.  Apparently riling up folks in town to oppose a terrible plan that would cost us the character of our city is the way that Mr. Wolfe wants to bring people together - bringing people together in opposition of the Council's efforts.
at October 19, 2018