I hear a lot from folks who say something to the effect of - 'The Council has always had Clayton's best interests in mind'.  To question that, is to question someone's motivations which I wouldn't presume to do.  What I can do, is look at the decisions made, the factual record, and evaluate for myself if I agree with them.  After doing that, I'm left with the question, are the actions taken by the Council consistent with the best interests of Clayton?

I talked previously about how Fulcrum was a wake up call - about how the Council has been trying to sell the downtown lot for years.  So much so that at various points renewing new exclusive negotiation agreements to sell the land and develop senior care facilities in our downtown were simply items on the Consent Calendar - deemed non-controversial so the Council could focus on items that may require more serious public debate.  Here was the first time the Council approved unanimously to enter into an ENA to develop a senior care facility: 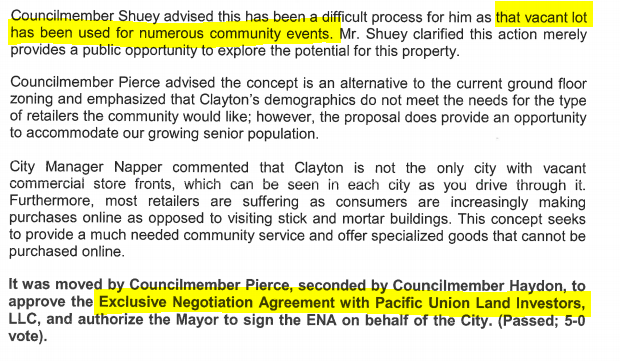 After a short time, they amended the ENA via the consent calendar: 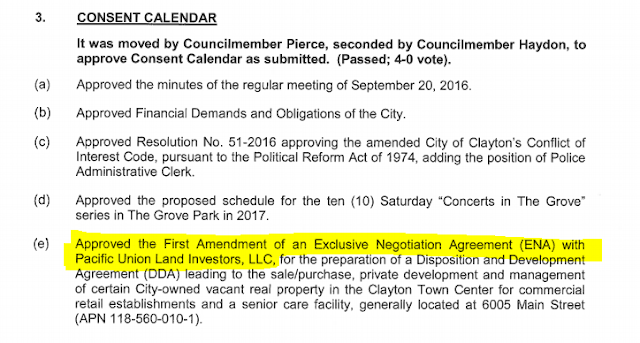 After the terms needed to be adjusted through more than just amendment, the Council approved a new ENA, again through the consent calendar. 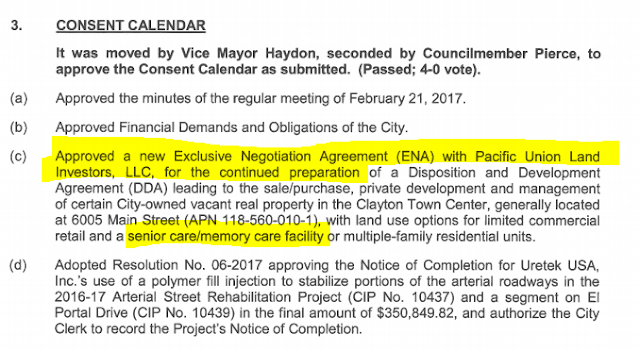 After the developer eventually decided to not move forward, the Council again entered into another ENA this time with Fulcrum:

Now of course Fulcrum has backed out, but it is only a matter of time before the Council again tries to sell the downtown lot.  Now Mr. Wolfe has already stated that the City purchased the land in order to sell it, so if he is elected it would be no surprise if he continued on the same path that Mr. Shuey and the rest of the existing Council has been on for years.

Now, is agreeing multiple times with multiple developers to an Exclusive Negotiation Agreement to sell the land and develop a 3 story senior care facility in the heart of our downtown in the best interests of Clayton?  I don't think so.  We would gain the meager tax revenue that it would generate, and in return pay with the character of our downtown.